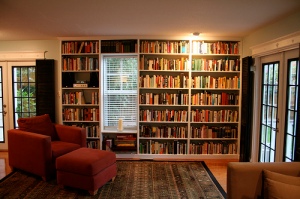 Currently I am reading

John Bester, trans., Once and Forever: The Tales of Kenji Miyazawa (1993)

Recently I have read (most recent first)

Hisham Matar’s The Return (2016)
David Kirkpatrick’s Into the Hands of Soldiers: Freedom and Chaos in Egypt and the Middle East (2018)

Anthony Doerr’s All the Light We Cannot See (2014)

novel about German boy and French girl during Nazi occupation of Paris, showing “the   ways, against alludes, people try to be good to one another” (back blurb)

Edward Larson and Michael Winship’s The Constitutional Convention: A Narrative History from the notes of James Madison (2005)

Michiko Kakutani’s The Death of Truth: Notes on Falsehood in the Age of Trump (2018)

Masha Gessen’s The Man Without a Face: The Unlikely Rise of Vladimir Putin (2012)

letter to his nephew about being black in America

James McBride’s The Color of Water

memoir from son of Jewish/Christian mother and African-American father

Timothy Snyder’s On Tyranny: Twenty Lessons from the Twentieth Century  (2017)
Doug Abrams’s The Book of Joy (2016)  conversations with Archbishop Desmond Tutu and His Holiness The Dalai Lama, on the occasion of the latter’s 80th birthday celebration in India

Isabel Wilkerson’s The Warmth of Other Suns (2010)  the migration of six million African Americans from the Jim Crow South between 1915 and 1975–to cities like Los Angeles, Chicago, and New York

Dani Sijie’s Balzac and the Little Chinese Seamstress (2000)  novel about two young men sent from the city to a mountain village for re-education during China’s Cultural Revolution, and about the liberating power of Western literature
James Rebanks’s The Shepherd’s Life: A Tale of the Lake District (2015)

Ta-Nehisi Coates’s Between the World and Me  (2015)  This book, by an African-American journalist from Baltimore, Howard University and New York City, among either places, reminds me of The Narrative of the Life of Frederick Douglass, in part because it clearly demonstrates the value of education and studying.  Coates’s high school meant less to him than college life at The Mecca, where he mixed with whole new worlds of black people he had never imagined.  He writes this book to his son, so that the young man can grow up with less fear and more understanding than his father.  Pay attention to your black body, he tells his son, and do not let others steal or break it.  Those who see themselves as white, the Dreamers, are part of the historical system that built “success’ on such theft and destruction.  Be smart, be awake, study the questions, and always struggle–he advises his son.  Persistent questions help the author try to understand what lies between the world and him.  Given the length and power of this letter-book, I imagine reading it again sometime soon.

Fiona Watson’s Macbeth: A True Story (2010)  I bought this from Fanfare Books in Stratford, Ontario, during our visit there to see several Shakespeare plays and one by Arthur Miller.  This history of the Scottish king gives valuable contexts for a respectful portrait of his reign, as speculative as it must be given the scattered pieces of solid evidence.   In her last chapter, Watson, a Scottish university professor turned professional writer, explains how centuries since Mac Bethad mac Findlaich’s eleventh century death have turned his memory into the one Shakespeare found in Holinshed and elsewhere.  Watson’s lively sentences make manageable and enjoyable otherwise dense and dusty reciting of royal lines.  She weaves a comprehensible tale of how  beliefs about kingship and this king evolved in the medieval Gaelic/Celtic/Pictish/British/Norse isles.

Helen Macdonald’s H is for Hawk  (My wife enjoyed this book.  Given that recommendation from an avid, smart reader, and given this author also has taught at Cambridge University (UK), as has Macfarlane, it seemed the logical way to end my summer reading.)

Robert Macfarlane’s The Old Ways: A Journey on Foot  (Recommended by a student.  Trusting and honoring the recommendation, I read this book while traveling to Nebraska and back.  During this vacation journey, I experienced numerous resonances.)

Mahmoud Dowlatabadi’s Thirst  (Found this novel in West Village/NYC bookstore last July. Given the recent nuclear agreement with Iran, I decided to read it this week, since notable Iranian author wrote it and set it during the Iran-Iraq war of the 1980s.)

Jennifer Sessions’ By Sword and Plow: France and the Conquest of Algeria  (given Algerian thread to the early readings, seemed like good time to read this history, written by daughter of friends/colleagues; Jennifer teaches at Univ. of Iowa; helps me understand Camus’s short story, “The Guest,” which I read with sophomores in a “World Literature” class;” the underlying idea of this class drives much of my reading this summer)

Tayeb Salih’s Season of Migration to the North  (saw reference to title in NYT review of  Kamel Maoud’s The Meursault Investigation; drawn to Arab Literary Academy’s calling it the most important Arabic novel of the twentieth century)

Paul Coehlo’s The Alchemist  (a colleague’s recommendation, from a Brazilian author yet set in southern Spain and the North African desert; with a dream-like tone similar to Hamsun’s but in a more abstract, legendary, symbolic way; Hamsun’s moves to the universal through concrete descriptions of one fishing village during one season–cf. Aristotle’s unities)

Knut Hamsun’s The Dreamers  (a dreamy, northern counterpoint to the Algeria-based novels, and from my wife’s family’s home country of Norway, set mostly during the season of the midnight sun)