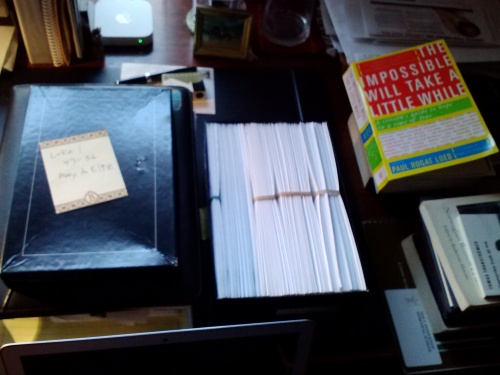 The letters in the box were recently written by high school students–in their own hand.  These students on behalf of individuals at risk around the world.  The letters are going to people in Iran, Mexico, Myanmar, USA, Saudi Arabia, Uzbekistan, Greece, El Salvador, and several other countries–as part of a campaign coordinated by Amnesty International.  Our school is sending one hundred and seventeen letters in all.  Think of them as Christmas letters–wishing peace and justice for the imprisoned individuals and from the heads of state.

Here are a few verses from Christian scriptures, named on the note to the left of the envelopes.  Mary, mother of Jesus, is speaking to Elizabeth, mother of John:

“he has scattered the proud in the imagination of their hearts

. . . he has put down the mighty from their thrones, and exalted those of low degree;

he has filled the hungry with good things, and the rich he has sent empty away.”

Students can write in many ways for various purposes.  This event gave them a real audience, and their letters make a real difference.  For example, over twenty years ago people wrote letters on behalf of a woman imprisoned by a military-led government.  This year she was elected President of that country.  Her release and rise to power came from thousands of people who applied persistent pressure.  I am not making this story up.  Letter-writers make a difference.